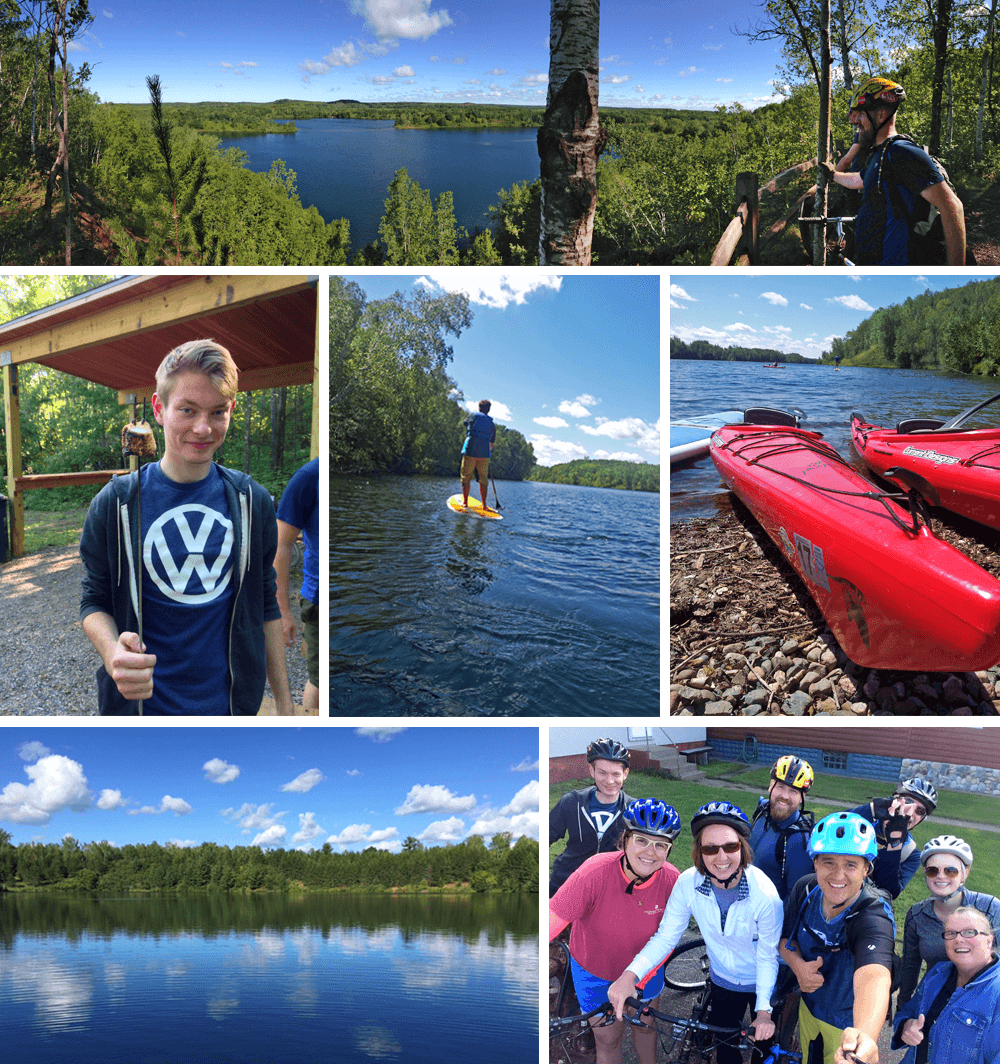 At some workplace retreats, the staff fills out a personality-type survey. After much discussion, these meetings often end with an amorphous call-to-action, then the surveys are stuck in a drawer, never to see the light of day. At RedHouseMedia, we have a different approach, such as our recent “Camp Cuyuna” staff outing at Cuyuna Country State Recreation Area (CCSRA). “At RHM, we believe healthy bodies equal creative minds, especially with the increasing use of technology. Cuyuna is a perfect example of where a 21st-century career, using only your mind and computers, can be complemented with physical activity before or after work—heck, even during work,” says Aaron Hautala, owner of RedHouseMedia. “It’s essential that recreation plays an important role for both employees and owners. We look forward to promoting Cuyuna, along with making outdoor recreation and healthy living a foundation of our business.” 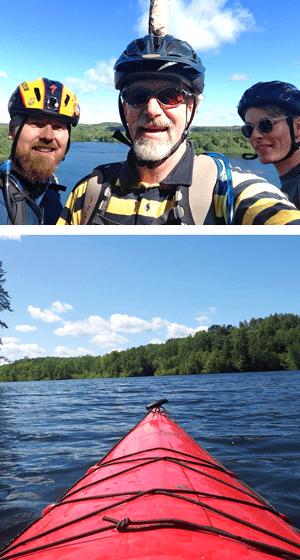 We quickly realized that CCSRA’s lakes, trails, and camping encourage camaraderie and teamwork—no paperwork needed. Together we discovered breath-taking scenery, wildlife, and heart-pumping action that rival any video game—interspersed with quieter moments on an overlook or on the water. After talking it over, we chose to hit the mountain biking trails in the morning and then do kayaks and stand-up paddle boards in the afternoon. With a quick stop at Cycle Path and Paddle, we were donning helmets and saddling up. Most chose “fat bikes,” which some think are just for snow, but they also grip the Red Dirt like they were born to be wild together. “It was challenging to go out of our comfort zones and ride the trails, but it was good to try new adventures,” says Jana Baecker. “Having support from coworkers was encouraging and made it fun at the same time.”

The RHM team decided to split up on different trail systems, according to difficulty. The trails range from mild to harrowing—the latter making you wish you had passed up that third pancake at breakfast. And just so you know—the trail named “Easy Street” has a not-so-easy side if you let ’er rip on the final downhill. “The Cuyuna mountain bike trails definitely lived up to their reputation,” says Bryan Petersen. “There was a variety of terrain and it was well laid out. My legs felt like rubber in an hour and my knuckles have never been whiter.”
After lunch at the Crosby Bar, with lots of water and soda to quench our thirst, we headed to the next leg on our Camp Cuyuna team adventure. Our choice of kayaks or paddle boards had been delivered to the new Miner’s Mountain Rally Center at Huntington Feigh Lake. The spacious parking area adjoins a beach, bike parking, picnic and grill stations, changing stations, and restrooms—even a bike mechanic stand.

Amenities aside, it was the first time we had all been on a Cuyuna lake. Huntington, like many of the lakes in CCSRA, was once an open mine until nature took over and flooded the abandoned mines. The trees still rooted on the bottom now eerily raise their limbs toward the water’s surface. As Minnesotans accustomed to shallower lakes, it was mind-boggling to grasp that these waters were hundreds of feet deep. And then there was the deep silence—broken only by our voices and the call of the loons. Feeling a bit like explorers, we set out on the water. Some chose to mix it up and took turns on each other’s kayaks and paddle boards. “One of the better ‘work’ days ever,” says Dain Erickson. “The aggressive, early bike ride followed by the easy-going afternoon paddle was a perfect mix of activity.” “Some of us even attempted stand-up paddle boarding for the first time—it was awesome and no one fell in!” says Petersen.
After a couple of hours on the water, what else could we do, but head to a comfortable campground yurt for s’mores? In one of the day’s tastiest examples of teamwork, an assembly line of grahams, chocolate, and marshmallows soon lined the picnic table and toasting forks were passed back and forth. “I really felt like I was on a vacation while we spent our day at Camp Cuyuna,” says Heidi Lake. “The rec area, only 20 minutes from Brainerd, has a different feel than the rest of the lakes area. The scenery, the trails, the yurts, and of course, the people—it was a fun day I won’t soon forget.” “For most of us, it was a first time at Cuyuna,” says Courtney Gran. “We really had fun doing something new together, from trying out a different kind of bike to making my first s’mores over a campfire at a yurt.”

Yawkey Lake at our yurt’s front door was the perfect backdrop for a convivial evening campfire before heading home. At RedHouseMedia’s Camp Cuyuna day, we discovered the satisfaction of sharing adventures while connecting in new ways with our team—no surveys required.